Frackers are planning new seismic surveys across the UK to work out where to frack, so if you see a ‘Thumper Truck’ (below) tell us as it means they are surveying the area and we would do well to resist even this happening.

In New Brunswick, Canada, the Native community surrounded and stopped these trucks to stop them even gaining the data.

Informative blog on the subject from Frack Off – http://frack-off.org.uk/seismic-surveys-the-fracking-spearhead/ 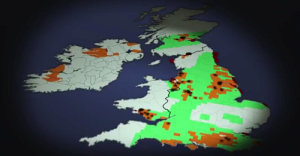 The green areas are now up for sale to fracking companies. The underground hydrocarbons are owned by the crown, not the landowner and are sold off in blocks called PEDL licences by the department of energy and climate change. The orange areas have already been sold.

The UK government has announced that roughly 60% of the UK is now available to be licensed to fracking companies. After a brief “consultation” period it is likely that the licenses will be handed out to fraking companies in the first half of 2014. The licenses would cover the exploitation of both shale oil and gas and coal bed methane (CBM).

The area is based on that covered by a newly finalised Strategic Environmental Assessment (PDF). Despite the name the document does not seem to be particularly focused on the environment and does not address the long term impacts of issuing these potentially 30 year long licenses.

To extract the amounts of gas that companies are bragging about in existing license blocks would require tens of thousands of wells. If large additional areas are licensed next year, the scale of threat will be much larger still. These developments would devastate our remaining countryside, industrialising huge areas with well pads, pipelines, compressor stations and processing plants.

The reality of unconventional gas is that it is very hard to extract. It is literally scrapping the bottom of the fossil fuel barrel. Densely packed wells must be drilled (up to 8 wells per square mile) over large areas, since each well individual wells does not produce much gas and then only for a short time. Worse, fracking is not an isolated technology but is part of a wider trend towards more extreme forms of energy extraction, which if not resisted could see even larger threats such as Underground Coal Gasification (UCG) become widespread.

Right now the community around Barton Moss near Manchester is fighting the threat to their region posed by IGas Energy’s attempts to drill a Shale/CBM exploration well there. Across the country communities are getting organised to resist these threats, with around 70 anti-fracking groups already formed in the last two years, and that number growing fast. – Article courtesy of the good people at http://www.frack-off.org

See how communities are organising themselves in Australia. The gas companies cannot get a foothold where this process is happening. – http://www.youtube.com/watch?v=PAskswiuecY